From Ifigenia, the wiki for intuitionistic fuzzy sets and generalized nets
Jump to: navigation, search

Generalized nets (GNs) constitute a discrete tool for universal description of adaptable, flexible, structured and reusable models of complex systems with many different and interacting components, not necessarily of the homogeneous structure and origin, usually involved in parallel, simultaneous activities. Generalized nets represent a significant extension and generalization of the concept of Petri nets, as well as of other Petri nets extensions and modifications.

Components of a generalized net 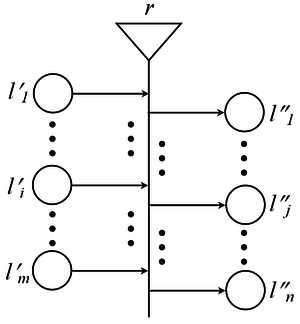 A GN transition with m inputs and n outputs

A generalized net consists of:

The dynamic structure consists of tokens, which act as information carriers and can occupy a single place at every moment of the GN execution. The tokens pass through the transition from one input to another output place; such an ordered pair of places is called transition arc. The tokens' movement is governed by conditions (predicates), contained in the predicate matrix of the transition.

The temporal components describe the time scale of GN execution. Temporal conditions control the transitions' moments of activation and duration of active state. Various other tools for fine tuning of the GN functioning are provided in the form of priorities of separate transitions, places and tokens, as well as capacities of places and transitions arcs.

Formally described, the generalized net is represented by the following four-tuple:

In a Petri net implementation, parallelism is reduced to a sequential firing of the net transitions and in general the order of their activation is probabilistic or dependent on the transitions' priorities, if any. The respective algorithms for generalized nets enable a more detailed modelling of the described process.

In the the book "Generalized Nets" from 1991 year [1], there were formulated two major algorithms, related to generalized nets:

The algorithm for transition functioning was later modified in 2007 [2].

Theorem 20 in the book "On Generalized Nets Theory" from 2007 year [3] states that the functioning and the results of the work of a given GN transition are equal for both algorithms, yet the difference between both algorithms is that in almost any case the modified algorithm yields results more quickly.

Generalized nets have been subject of multiple different extensions. For each of these it has been proved that represents a conservative extension, i.e. there exists an ordinary generalized net which describes the extended GN, i.e. both nets have the same modelling capabilities.

The following extensions of GNs have been determined so far:

This article is a stub. You can help Ifigenia by expanding it.
Retrieved from "http://ifigenia.org/index.php?title=Generalized_nets&oldid=4533"
Categories: